When it comes to cyber security attacks, what do we know about them, where do they originate, how do they succeed, what is the goal of certain type of attacks? These are just some of the questions that hit the public imagination when it comes to attacks to Small Organisations. However, there are many myths and misconceptions around them.

In terms of cyber attacks to Small Organisations, understanding some of the attacks enables an Organisation to prepare itself better by utilising threat modelling approaches in risk management, and cyber threat intelligence. Knowing how attackers attack you helps focus the weaknesses they exploit better.

As usual, we won’t be going into technical details in any depth, and it isn’t important to understand everything about every type of attack, all in one go. We are going to introduce several words, phrases and terms that you may have heard of before but weren’t sure of, as well as several you may never have heard of. 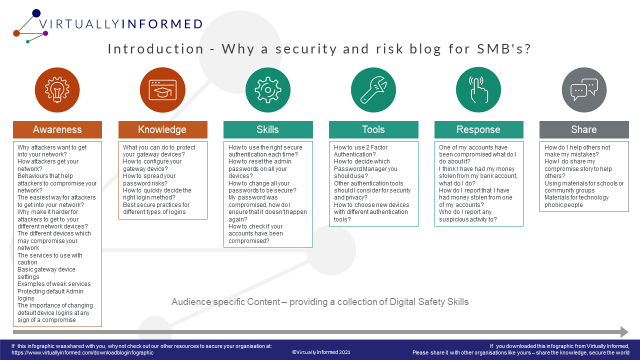 Myths and Misconceptions about Attacks

One of the biggest factors that make it easier for attackers to succeed in their attacks is that the Small Organisations as prospective victims have misconceptions about both attacks and attackers. Having previously looked into attackers, today we’re going to look into the different types of attacks used by attackers to succeed in the goals they have. The aim of what we are covering isn’t to make everyone paranoid that they don’t use any technology, but rather to open their eyes to the sort of things that help and make it easier to be attacked. In the same way that people never consider crossing the road without their eyes open and look in both directions before deciding to cross the street, we want to help organisations to pick up tips about what they do to help attacks succeed - so they can stop doing them.

Here are some of the myths and misconceptions about attacks:

Most of these misconceptions lead to Small Organisations to not prepare themselves against attacks, due to a false sense of security that they won’t be attacked as they are not a viable target. Attackers starting point for attacks is not necessarily the end organisation, but on their own starting point of what they know about people, their behaviours and or the technologies they use.

Why Learn about Attacks

Small Organisations are busy doing what they set up to do, the last thing any of them need is to have to learn new things that don’t involve providing the service or product they set up to provide. So, the reason we suggest that it may be beneficial for them to learn about attacks is that even at a high-level they can use the basics to reduce the risks of a devastating attack.

With each type of attack, it isn’t important to know all the technical in’s and out’s but more about what behaviours at the human level facilitate the success of that attack, and also what technical controls can be used to identify, detect and respond to that type of attack.

We do not for one minute believe that Small Organisations should all learn everything that needs to be known so that they can better protect themselves, but to learn enough so that they are able to reduce attacker opportunities rather than facilitate them. 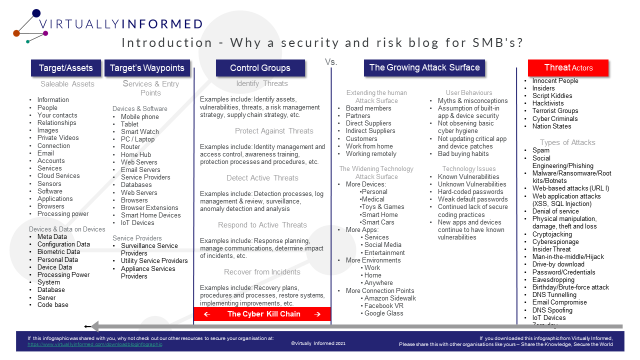